Written by Cerrone Plumbing, Heating, and Air Conditioning on 22 August 2020. Posted in Blog. 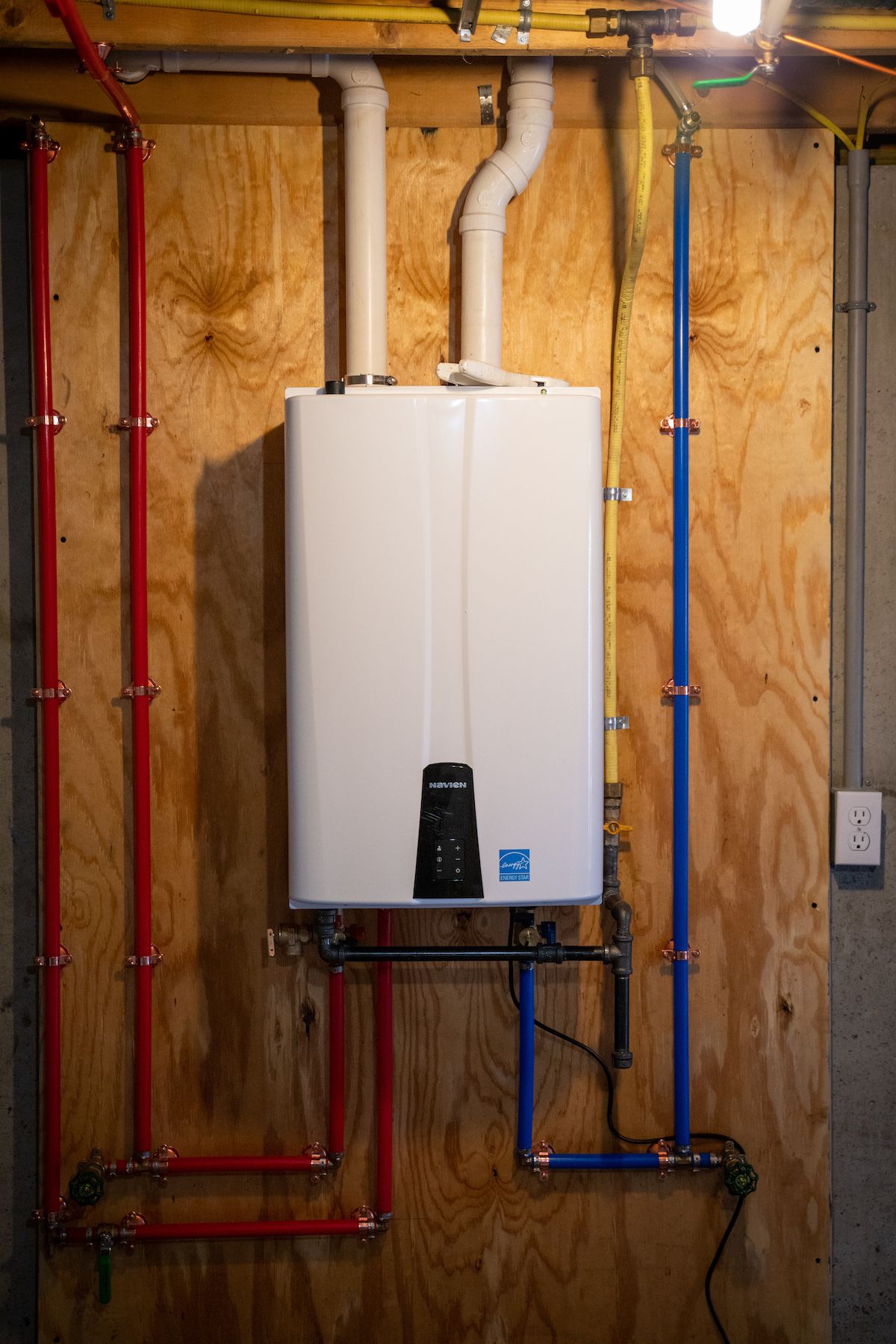 If you are thinking about switching from a traditional tank system for your hot water to a Tankless hot water system there are a few things to consider. As a newer technology, relatively speaking, the idea of “instant hot water” can be tough to understand. Folks often love to go with the tried and true method of storing water in a tank, and continuously heating that water until there is a need. Once that need arises you turn on the faucet and wait for the hot water to flow out. It works and has worked for a long long time. I know some feel that if it isn’t broke don’t fix it, but there is a better way. A way that will save you money. Let’s take a look at the tankless hot water heater.

As we said, with the traditional tank hot water heater stores the water and heats it somewhat continuously. This means every time it fires up it is spending your money in the form of used electricity, fuel oil, or propane to keep the water hot. Let’s pretend you are gone at work all day for roughly 8 hours. You showered before you left, depleting most or all of the hot water in the tank. After this, the tank spent time, perhaps 15 minutes, heating the water in the tank back up to the set temperature. Then it sat there all day with no use in sight. Now add to this that at some point (and perhaps more than one) the water in the tank fell below the set temperature and so again the hot water heater kicked on to bring it back up to temperature. How many times does this happen during the day? How many times did your tank hot water system spend your hard earned money to heat water that was not being used and potentially could not be used until the following morning when you take a shower again. So by the time you take that morning shower the next day you have now paid to heat that water not once, but many, many times.

Another strike against the tank system is that it can only hold so much water. Perhaps you have a 40 gallon tank, wIll you use half of that while you shower? Maybe you like to take nice long hot showers or maybe even a bath. How big is your tub? Are there other people in the house that also need to shower and find that by the time they get in there is no hot water left? If there are 4 people in your home that need to take a shower in the morning chances are the fourth person is going to have a rude awakening.

One last strike against the tank is what can happen when they get too old. Hot water tanks, over time, can begin to degrade and eventually burst. Too many times we have been on a call when someone’s hot water tank burst and sent 40 gallons of water onto whatever is underneath. Now in the case of a basement with a cement floor perhaps this is not a big deal. If you have a finished basement or the hot water tank is located on one of the upper floors that is a lot of water that can potentially damage flooring, sheetrock, electrical systems, appliances, and more.

Tankless hot water systems give you hot water on demand. No more storing and heating water so that it is ready when you need it. With tankless it instantly heats the amount of water you need and sends it to you as you need it. No more paying for hot water that is not used which leads to cost savings for you.

Tankless hot water systems give you an unlimited amount of hot water. No matter how big your tub or how many people there are in the house, they will always have hot water. No more cold showers for anyone.

No tank means you never have to worry about it getting old and bursting, sending gallons and gallons all over your beautiful home, incurring further damage.

Are they more expensive? In some cases the Navien Tankless Hot Water Systems we sell are more expensive than your traditional tank. You should take into consideration the day to day cost of running a tankless VS running a tank system. Over time those cost savings can more than pay for the system. As a recent customer said to us, “The system will pay for itself in under 5 years and then we will be saving money each month compared to what we were spending before installing the tankless system”.

We also offer 0% financing on many of our plumbing, heating, and air conditioning systems, Which helps homeowners install these systems in cases where they may be short on cash. Of course financing is subject to submitting an application and meeting the requirements.

Two last thoughts on the Tankless Hot Water system VS the traditional tank unit. Tankless Systems take up less space and they are less impactful on the environment. All of this adding up to the fact that we think you should switch out that tank for a tankless system, whenever possible.